I finally completed my interface activity this past week. In my last blog post I shared the first step. I started off easy and went with the simple parallel circuits. But then I had a bright idea, and instead of using the copper tape as “buttons” or sensors, I installed actual buttons! I used the same coding, press space bar to activate a cry for help and press the down arrow to show spiderman coming down to save the day, but instead of the copper tape being connected to the makey-makey for the sensors, I connected two buttons in the circuits place. To me the buttons added a more complete effect. I like the satisfaction of pressing a button and expecting something to happen, and it actually happens! A classmate commented on my interface story activity that it reminded them of an old 90’s arcade game with the joystick and two buttons. My story element containing Spiderman probably influenced that correlation a little more also. 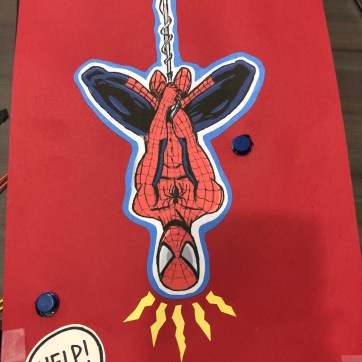 Working with the makey-makey was really cool, and a great element for the classroom. It pushed coding a little further and made materials a lot more interactive. I like how I was given matierals and not given direct instructions. It made my learning a lot more exploratory and personal. I made my own design decisions and learned exactly what I wanted to learn. And if I wanted to learn more, I pushed myself to add more elements to extend the learning and take it to another step.

Now as far as my impossible project…

I have my idea, I have settled with building my own oil diffuser. I made my porposal in class and with a little table discussion, I recieved a green light to proceed with my project. The only issue I had was the electrical portion, having to mix water with an outlet for my plug in diffuser. But I did mention that some are batterie operated and some are even USB plug ins that can work straight from a computer, so that took the ease off of worrying if id electricute myselfFor the next couple of classes I plan to be taking apart an oil diffuser and seeing how they work. (preferably looking into battery opperated ones and usb plug ins) – I only have used plug in ones that go to an outlet on the wall in my home so I want to explore the battery opperated one and usb first to get familiar with it and potentially try to even incorporate some parts into my own diffuser.

As far as design aspects, I am not too sure what I would want it to look like, for now I just know I want it to be able to light up, maybe change colors and possibly even add a music compenent to it as well. I will have more detailed images and a blue print once I get started on it soon 🙂

View all posts by ashycx